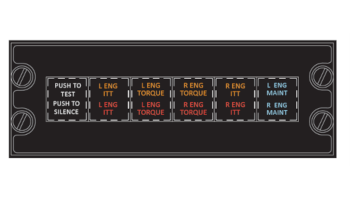 Aeronautix has been awarded an FAA STC for our Aural Warning and Annunciation System (AWAS) which we are manufacturing and installing on the Beechcraft King Air 350 and 300 series aircraft. The system, designed to integrate with the Collins Pro Line 21 avionics suite and provide improved situational awareness, will give aural voice warnings to pilots avoiding potential engine damage due to Over-Temp or Over-Torque conditions.

This non-invasive on-site installation takes about 12 hours and consists of wire harness connections to the existing 429 data bus in the King Air. AWAS is mounted in the center console on civilian aircraft, is authorized for other locations in military configurations, and replaces the Cobham 630A-000 warning amplifier.
With PT6 engine overhauls averaging $300,000 or more, the AWAS will pay for itself with a single voice callout.